The andioxidant value (ORAC) of the Northern wild berries, such as bilberry and cranberry, is several times higher compared to dried fruit and other products in the superfood category. 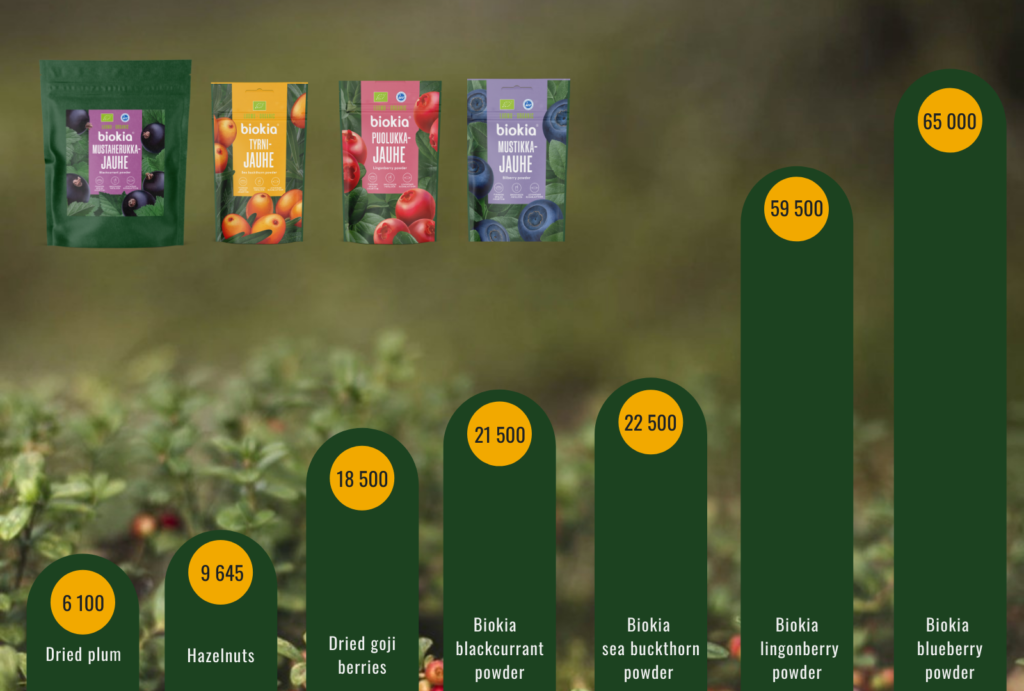 VITAMINS C AND E IN BERRIES

Vitamin C is the best known antioxidant in berries. It protects the body from harmful oxidation, prevents tiredness and improves absorption of calcium and iron. Vitamin C is also necessary for the formation of collagen, support material of cells. Vitamin C enhances the antioxidant effects of vitamin E.

Vitamin E is a fat-soluble vitamin which works as an antioxidant in the system and protects cells and fatty acids in the system from the harmful effects of free radicals which are generated in metabolism. Vitamin E is a general term for several similar molecules. Berries also contain more of vitamin E than fruits. Recommended amount for women is 8mg/day and for men 10mg/day.

Berries mainly consist of water; 80 to 90% of their fresh weight is water. Out of dry substances, the majority is carbohydrates and organic acids. Berries contain only small amounts of protein and fat. Because berries are low in fat and contain lots of water, just a minimal amount of energy is gained from them. Most of the energy in berries comes from natural sugars.

Unabsorbable carbohydrates are called dietary fiber. Even though the body is unable to digest it in an absorbable form, fiber has many important functions in the human gastrointestinal tract. Insoluble fiber maintains bowel movement, contributes to growth of useful bacteria in bowels and supports weight control. Soluble fiber slows down the rise of blood sugar levels after a meal and enhances cholesterol efflux from the body.

Berries contain both insoluble and soluble fiber, pectin. In addition to oat and vegetables, berries are an important source of soluble fiber in the diet. Raw and only just ripened berries contain the most pectin. Recommended amount of dietary fiber is 25–35g/day.